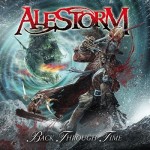 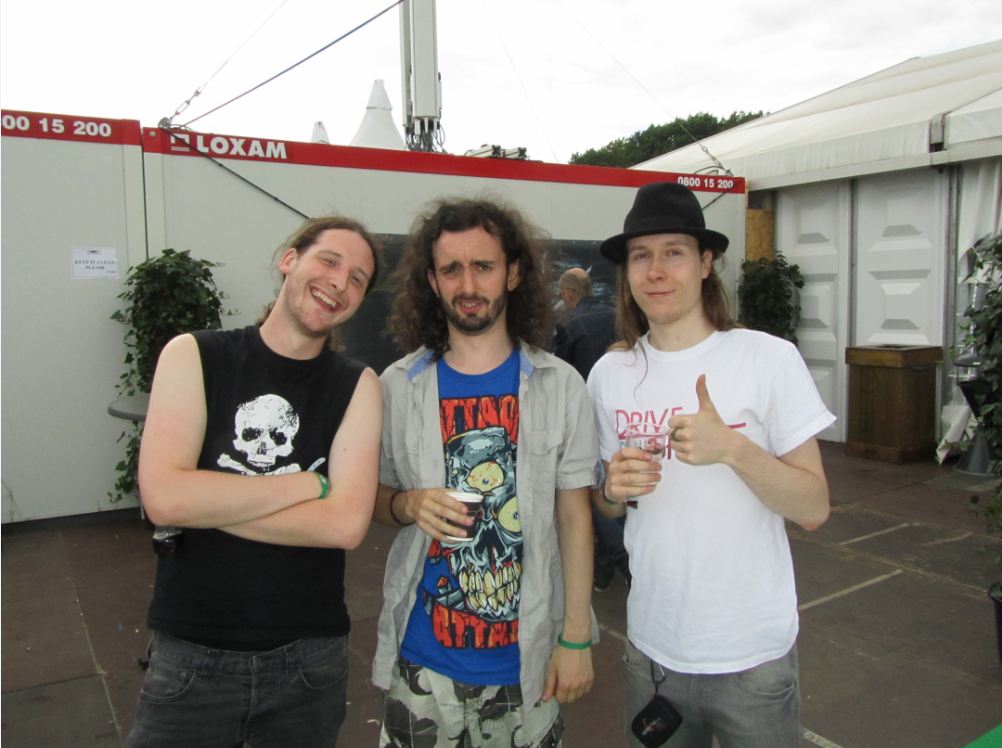 Welcome back at Graspop. How are you doing?

Christopher: We had a great time.

Gareth: We have the best day, the sun is shining, it’s beautiful.

Christopher: It was a fantastic show and here it’s my favorite backstage in the world. It’s a fantastic place to be an obnoxious rockstar.

Congratulations Christopher with your birthday. Is it the first time that you played on a birthday or did you do it before.

Gareth: I think we once played a day ahead of your birthday.

Christopher: It was the day that Michael Jackson died.

Gareth: Michael Jackson died like 4 years ago, or 3 years. It was then.

How did Alestorm came about?

Gareth: We can’t remember it anymore.

Elliot: It’s so long ago.

Christopher: It was me and some guy. No it wasn’t even me! It was some guy and some other guy

Christopher: Yeah, I was asked to be in this band. He was in the band before me! So they started Alestorm. And then they said to me, let’s start a pirate band. I thought it was cool and so we wrote a song about pirates. And that sounded cool, so we said, let’s write some more songs about pirates! And somehow maybe 15000 people decided it’d be fun to watch us play these songs about pirates.

Last year, your 3rd CD 'Back Through Time' came out. Now a year later, are you guys happy with the result?

Gareth: I think it was good, I still like it and people liked it.

Christopher: Would you change anything?

Are you preparing new stuff already?

Gareth: Not yet, we probably do something else first.

Christopher: Give us a year or so… At this time we have 3 albums , we got enough music. We still have 15 songs that we never played live so on this moment we don’t need to do more.

What is your favorite number on the CD?

Gareth: I like the opening track ‘Back Through Time’.

Christopher: I like ‘Death Throes Of The Terrorsquid’. But I think they’re all acceptable, they’re decent.

How did you get started in music?

Christopher: You did things in music before this?

Elliot: You were never in bands before this?

Christopher: No! This is my first band!

Gareth: I can play the clarinet!

Christopher: You did that recently didn’t you?

Gareth: I played the clarinet for the Serbian entry of this year’s Eurovision Song contest. I don’t know why they got me to do it because I’m not from Serbia but I did it anyway because it was cool.

Gareth: Pretty bad, there are a couple of bands. I think it’s us and Man Must Die and Powerviolence.

Elliot: I don’t think Powerviolence is quite metal…

Gareth: It’s not really a scene.

Gareth: We never really played a lot of gigs in Scotland.

Christopher: Before this band got signed, we played like 3 gigs in Scotland. In Dundee. And that was it.

Gareth: Yeah and that’s the reason we come to Belgium over and over again!

Elliot: There’s no way that we can play in Scotland for that many people at a festival ever!
The biggest crowd we ever had was around 800 people and we thought that was amazing!
But compared with today that’s fucking nothing.

Christopher: I think there were 800 people in the front row today.

Christopher: On this time we are not booked but inevitably we’ll come back. To the Hof Ter Lo or maybe the Biebob.

Gareth: The Biebob is kind of small, but I love the venue. We played there two really cool shows.

Can you describe Alestorm in 3 words?

Christopher: I don’t know, I have to live somewhere, man! Tilburg is just around the corner. It was so nice, I woke up this morning, it took me 45 minutes to go to this festival!
Gareth and Peter, their route to get here was like,  they live in Belfast, they have to take a bus to Dublin and that takes 2 hours, then had to take a flight from Dublin to Amsterdam via Copenhagen and then took the train to Tilburg.

Gareth: It was really fun watching it on a map.

Christopher: You see, that’s the reason why I live in Tilburg!

Gareth: He lives in Tilburg so he can get to Graspop conveniently. It comes in handy once a year.

What would you do if you ever got shipwrecked in reality? (Other than drinking rum of course).

Gareth: It would really be difficult to deal with.

Gareth: We’d all rape each other. We can all live without food and water but we can’t live without rampant fucking.

Elliot: I think Gareth would be the first one to appear attractive to the rest of us.

Gareth: That would mean my ass would just got fucked in.

Christopher: There’s no lube on a desert island. You could liquidize some shellfish.

Elliot: You could find a non-poisonous jellyfish.

Gareth: I think that would last about two hours and then we would die.

Which bands inspire you?

Gareth: I loved them.

Gareth: I met with Paul Simon on the way to Graceland, that was great. I’m also big into John Denver.

Christopher: He died in a plane crash and that’s something we don’t want to do. So that’s some way of an inspiration.

Elliot: It’s an inspiration not to die that way.

Gareth: Let’s not be John Denver!

Are you doing special things before getting on stage?

Elliot: We had Bacardi Breezers. Today, ten minutes before going on stage, we went to the dressing room to search for some cups and some Sprite to mix it with our vodka. It was a close call getting back in time.

Christopher: We had seven minutes to spare, we got back in time and we made some cocktails… and we played!

And then we came on stage and then there was a power cut and that was really embarrassing. We were the first band this day so we did our sound check at 10 o’ clock. Everything was great and then we came on stage, then we looked at our gear, all the lights were all off and that was really ‘fuuuuck’. I went to the sound deck and screamed “The power is off” and he was like “Oh yeah… shit”. There’s been a short-circuit, something melted and they had to plug our shit in somewhere else.

Gareth: Luckily it didn’t take us long to get back into it, because usually something like that would ruin an entire show, but it was alright in the end.

Christopher: Otherwise it would have been one of the best shows we have ever done.

You once covered a song that participated in the Eurovision song contest, has Alestorm ever considered participating themselves?

Gareth: It’s difficult, it depends from the country you live. In the UK you got to be friends with the controller of the BBC.

Gareth: You’ve got to be all ‘matey’ with Andrew Lloyd Webber and have connections with the TV world. I think in Scandinavia there's a competition and that’s the reason that they’ve always got metal bands.

Christopher: I’m not sure how it works. But can we maybe represent Belgium?

Thanks for your time and enjoy your day! 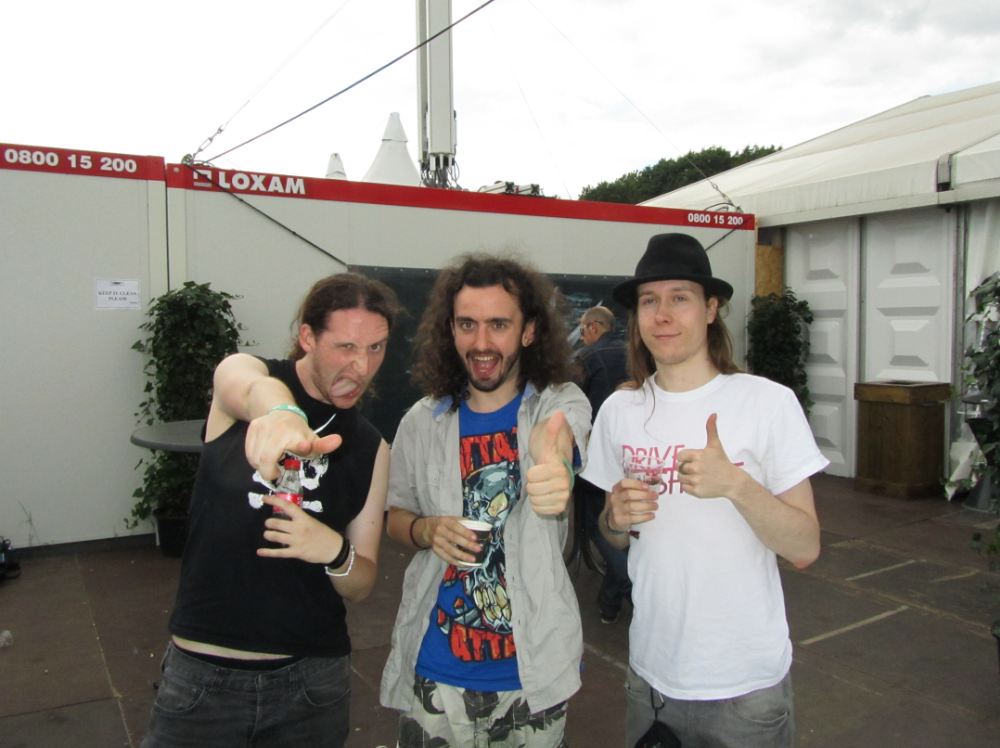