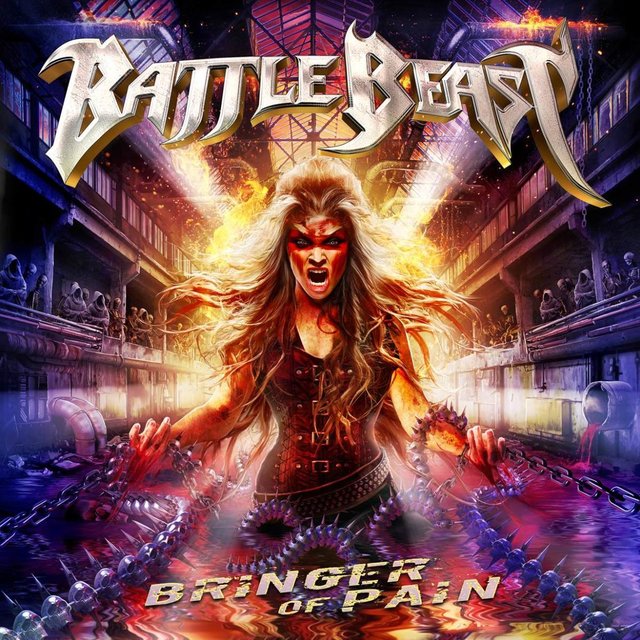 “Well actually, the name came from this song we have on the new album. It was written by me and Joona, our new guitar player. The name actually came up as a joke. He had written the music and I listened to it and loved it. I started writing lyrics right away, it was the easiest song on this album. The lyrics and the melody were just flying out of my mouth so to say. It’s not always that way of course, some songs need a lot of polishing and looking at it from different angles.”

The first promotion of the album was with a short movie of you running through the woods and telling people to buy the new album when it comes out. Who came up with that idea?

“It was actually my idea (laughs). We were just thinking of what could be a funny way to promote the new album. We were just having a dinner and we just came up with that idea. I did the whole video by myself, my brother actually helped me with the final result.”

The album cover, is it you that is represented on it?

“Well no, Jan Urlund who is the designer, I think maybe it was his idea to kind of make a mixture of me and a bringer of pain figure. I think he succeeded in that, my hope was that he would make it look even more angry. I love the colors of the cover, it looks like a comic book cover a little bit, so that is something I really like.”

King for a Day was the first single, what made you choose that song?

“First of all, King for a Day was the only song that everyone in the band when we listened to it when it was just a demo, thought “this is so good, this is so much single material”, I think that was the prior reaction, because everybody liked it so much. It was something fresh, but still something the same old band kind of song but with a fresh angle, an exciting thing. I kind of got these vibes from the song that it’s a movie trailer and kind of a James Bond vibe also. I love the melody and especially the chorus I really like, it’s really catchy. When we were shooting the music video with our fans it was so nice because we could actually see the reaction towards the song when they heard it in the set for five hours, they were still like “we want more” (laughs). Really good feedback from us.”

What about the story behind the album?

“The story of Bringer of Pain, I think it’s a mixture because we had five different song writers this time. It’s a mixture of different experiences. For example Bringer of Pain is my kind of perspective of a fantasy world that I by accident created when I heard the music for the first time. Bringer of Pain is actually a female character in this place called ‘Glow’, it’s a fantasy world. Bringer of Pain is a soldier, an Amazon woman who has also inherited this kingdom of Glow. She’s trying to get this crowd to herself and she’s fighting this army of an opponent she is killing in the song Bringer of Pain (laughs). So I started to get into this fantasy world more and will definitely write more songs about that, the world and its characters in it. But there is more also. Like King for a Day is also about this real world and how people are or can use their power for wrong. It’s kind of in a humoristic way showing that. If someone like a politician does something wrong we’re going to judge them. But I think it’s also something that is good nowadays, a lot of things happen in the world so as musicians I like that we somehow can process those issues also, the issues that people have to deal with every day. Then of course we started categorizing in the album, there is also personal stuff that we deal with. Of course we have written also the song We Will Fight Together, it means that no matter what happens, we will stick together, for the things that we think are right. Also it can represent some power song for people, who want some empowerment. So I think that is some kind of hymn for power. I think the story of this alum is that it was born from people who have been in some way beaten and conquered and we will never stop.”

How would you compare this album to previous Battle Beast albums?

“Well of course a difference in song writer. Anton was the song writer of the previous albums. Of course we still appreciate his skills as a song writer, he’s a good song writer, there is no denial in it. The major difference is that. And then there is this vision. Anton had his own vision, he wrote about things that he just thought that were important and about his personal experiences. So I think because we had this vision about Battle Beast that this is a band and not just a one guy orchestra. I think this is the major thing in the album, there  are more perspectives and stories and different worlds that are represented. According to the feedback, we did it pretty well.”

Anton was indeed replaced by Joona, who is the brother of Janne, did you find in him a quick replacement?

“Yeah, actually when we decided to go separate ways with Anton, we asked two friends of the band, that was Joona and Ossie. They both are close friends of the band and are really good guys and really talented guitarists. They were covering the role of guitarist during 2015. In the end we had to start doing the new songs. Of course we already started doing some drafts and demos during the beginning of 2015, but we really had to start moving our asses so to say. At the end of 2015, we had to decide who was going to be a member, because that person should be part of our new album. So we decided that Joona, even though it was kind of a difficult decision because Ossie is also a really nice guy, we never want to disappoint anyone, but I think the biggest thing that made our decision was that Joona actually started testing his songwriting skills on Battle Beast before he even knew that we were considering him as a new member. He was really showing his effort and motivation towards the band and I felt like he was part of the band even when he still wasn’t. So I felt like it was a really natural move that he was chosen. Everybody is getting along very well with him. He’s like this calm, nice and very talented guy who has the biggest work ethic. It was really nice to hang around and work with him.”

Surprising that he wrote the song Bringer of Pain already, that’s incredible.

“Yeah, have you heard his other bands? You can actually hear how talented he is as a song writer and he’s been also a guitarist for the Imperium band. He’s got this really good sense of style and he can also do those kind of true heavy metal songs, but also very melodic and big songs. For example Beyond The Burning Skies is also written by Joona, so there is a good comparison between Bringer of Pain and that one. He’s a really talented song writer.”

From a simple contest for the Wacken Metal Battle to your own headlining tours, Battle Beast surely evolved a lot. You were not there at the very beginning yet, but how do you look back on all your years in Battle Beast and the evolution in it?

“I think Battle Beast is always going forward and developing their actions for how we do things. It’s been full of adventure I think because during these nine years that Battle Beast has been official, there have been a lot of changes in the band. I think the sound of Battle Beast has been developing forward all the time. Also the coverart has been developing and people in the band are growing as well. Sometimes we grow apart but then we grow back together. I think Battle Beast is something very special. It’s not only a band but I feel it is some kind of power of nature (grins). Our fans for example, they are also part of this band. When we have our shows, without the fans moshing and banging their heads and singing along, being part of the whole atmosphere, we wouldn’t be the same band. We really appreciate the support and everything that our fans do for us. Also the people who are around us and help us succeed, also magazines and reporters, you make us grow visible for people who don’t necessarily know about us. And also our management and record label, I want to include everybody who helps us go forward. People believe in us, we can continue doing something special. It’s been a really exciting ride, I’ve been with this band now for over 4 years and it’s been really great and full of adventures and experiences, also a lot of emotions both good and bad. But most of all, this is a family and I feel like I can solve anything in this band. In a band it’s very important that we keep up the friendships and relationships between everyone who is involved, because otherwise it can starting clashing the whole thing. I think in your job or your life, relationships are very important. When the relationships are working, all the results are also the best.”

Noora in the spotlight:

Noora is not only purely into metal, it’s actually the newest thing in her singing career. “I’ve listened to metal since I was 15”

What is your favorite metal album?

"Well well… I don’t know about an album but my favorite artist is Iron Maiden for sure. I love the… I love Bruce Dickinson (laughs). He’s been my biggest idol since I started listening to metal music. I love almost every album of them. Definitely I like mostly the albums that Bruce is singing on. I listened to the very early Iron Maiden, the thing I like about that is that there is a kind of rawness, but I don’t know, the singer wasn’t my taste in the early Iron Maiden. But Bruce has been vocally and in his performances my biggest idol, so usually when I think about what bands I like, it’s always depending on the singer."

What’s the first album that you bought?

Do you still buy physical albums?

"Sometimes I do. Usually when I have cd’s I don’t buy them, I get them as a present because now when I’m in Battle Beast I usually get some new releases from Nuclear Blast as a present or people give me their albums so that I could listen and maybe push the band forward or recommend them. People really reach out to me also when they want some help to get forward in their careers."

Can you name something that you recently listened to?

"Hypocrisy was the last band, the newest album. I don’t remember the name but it’s a really good band, I like very much the fresh and hard way that they are playing and the songs are really tight, it was really nice."