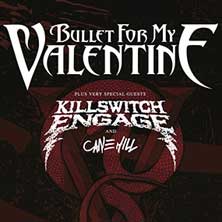 Artiest: Bullet For My Valentine

Are you looking forward to today’s performance? What do you expect with the Belgian fans?

Of course, absolutely. Well the same thing as everywhere, the crowd screams, lot’s of energy, a good mood, singing along.

Are you going to welcome us with a French ‘Bonsoir’ or a Dutch ‘Hallo’ or ‘Goede avond’?

Oh, maybe, if the moment hits me.

The day after tomorrow it’s one more show in Germany then you go back to the UK. You will be playing sometimes even 2 concerts in 1 city. The 2nd show being a full The Poison setlist. Is this to celebrate the album or where does the idea come from?

Yeah, it’s to celebrate the fact of how important that album is to us and to our fans. We’ve never done it before, we thought it would be a great way to celebrate a decade of that record. In the venues where we play that album, we’ll have finished our cycle, so it’ll be great to finish off the tour with that.

Can the European main land expect this in the future as well?

Maybe on a different record. But on The Poison we’ve had a really long year and we just want to end it on home soil.

Do you expect sold out shows there?

Yeah, most of them already sold out. There’s a couple of them that have still some tickets but perhaps it’s only a matter of time.

It has been about 18 years since you formed the band.

Something like that, from the very first beginning way back.

Can you believe that? Time goes so fast! How do you look back on playing covers back in the days with Jeff Killed John to the first release of The Poison to a successful career now with currently Venom?

It’s mind-blowing, you know. It’s something we dreamed of. We always dreamed of becoming rock stars and tour the world and be like our favorite bands. That’s what we wanted to do, we never anticipated it happening truthfully. We were all so young and it was but a dream, but that’s what as a fan of music you want to do, you pick up your guitar, play music and want to make a career. Thankfully it did.

With Venom, is it again a next step?

Yeah I think so. The shows we’ve done with Venom are some of the biggest we’ve ever done in some territories, in some we’ve taken a step down. We try to spice it up a little bit. It’s good, we’re trying to do things differently, we release stuff randomly and everything has changed a lot in the music, so we’re just trying to keep it interesting.

Venom is out for about 1 year now. How is it being received by the fans?

Yeah, it’s been great. It’s the highest chart record we’ve ever had worldwide. So yeah, it’s been received very well and the tour is going good, it’s the ultimate indication of how well it’s done. We get sold out shows all over the planet again.

Where do you keep finding your inspiration to write a new album?

Inspiration to write an album is just a passion for music and doing what I like to do and love. Writing the lyrics is a different thing, it can depend quite dramatically on what mood you’re in. The inspiration is to just keep going, things we haven’t achieved or already achieved. What we do, we don’t want to do anything else. That’s kind of what Bullet is.

Did the recording process differ from other albums this time?

No, the only thing that went different is that we took a lot more time writing it and demoing it. Other times we did it more spontaneous but this time we wanted to make sure that we had what we wanted before going in the studio, so it took a little bit more time. We’re never searching for perfection but we’re just searching for the best that we can be at that time in our career. Because each album is different, that’s what you are at that time, you know. We didn’t want to do it until we knew we were happy.

What will you do after touring this and next year? Planning a new album (something already)?

Yeah, at some point. We’re going to take some time off first, we’ve been traveling since July 2015. It’s been pretty hard, everyone is tired, everyone is beaten up, the crew has a hard job as well… So we’re just going to take some time off and when everybody is energized and everyone feels like we’re ready, we want to get the ball rolling again. Because once the ball starts, it doesn’t stop for two, three years. It’s something that we need to be refreshed for.

Is it somebody saying “hey let’s do it again” or how does it go?

Yeah, I think it is. It’ll be one person who brings it up and then we’ll have a conversation and if everyone feels the same we’ll do it, if we don’t, well cool, we’ll call in a couple of weeks. Very casual.

It’s been you, Matt, and the 2 Michaels for years in the band, but bass position seems to switch after some years. Is it difficult to find a new suitable bass player that fits into the band?

Yeah, it’s the only time that it has ever happened, really. It was something that we didn’t expect to happen. It was a bit stressful initially, but as soon as Jamie came into the equation, we had a couple of rehearsals with him and it went easy. He’s from Wales as well, that helps undeniably rather than having an American or a Swedish guy. But we weren’t ruling anyone out, everyone was welcome to come and have a go but Jamie being at the top of this list and having the same musical background as us, being from the same part of the world as us, it makes sense.

How do you guys pick the songs for the setlist? Do you predefine it upfront?

A band like Bullet has a lot of fangirls and fanboys. Does huge or even obsessive fanaticism bother you from time to time?

No, not at all. Having fans is the least of my problems, you know. It’s a beautiful thing, they are the reason why the band became so successful. We’ve done our part and they have done theirs, it’s great. There are a couple of people that we know that are quite full-on, a bit more obsessive than others and are very active online, at social networks. But that’s the same as when I was young, growing up with bands like Metallica, I was obsessed, you know. Every cd, every video they brought out, every documentary, … get your hands on every live performance I could see at that time on Youtube and stuff. That was me as well. It means a lot to some people.

Do you have sometimes fans that come to you and say that your music means a lot to them?

Absolutely, every day. When we do meets and greets and stuff. They tell a little story, a background on how it helped them, that’s just so great. It’s not something you write music for, but it’s something that happens after you’ve already done it. It impacts people quite immensely which is great, as long as it’s in a positive way, it’s cool.

The Brexit. What do you or as a band think about it?

I don’t think it’s actually going to happen. It was more of a protest I think from a lot of people in the UK that didn’t really understand what the implications would be and now it has kind of become an implication on the people that can understand what it’ll mean for them and they are like fuck. Especially for a band like us, touring, the logistical nightmare it would be to tour around Europe. It wouldn’t be actually possible for some bands to tour in Europe. An example: we passed through two countries to get here, so what do you do, get off twice in the night? That’s not good, it’s ridiculous. So I think those are the kind of things that the people need to think about, I don’t think it will actually happen. I think everyone knows that who did vote fucked up.

It’s mental. I think again it was a lot of people voting for Trump purely because they didn’t want Hillary to win either. Not that they want him to win but now it happened, let’s see what that brings I guess when I go to America, see if he’s a dick. *laugs* 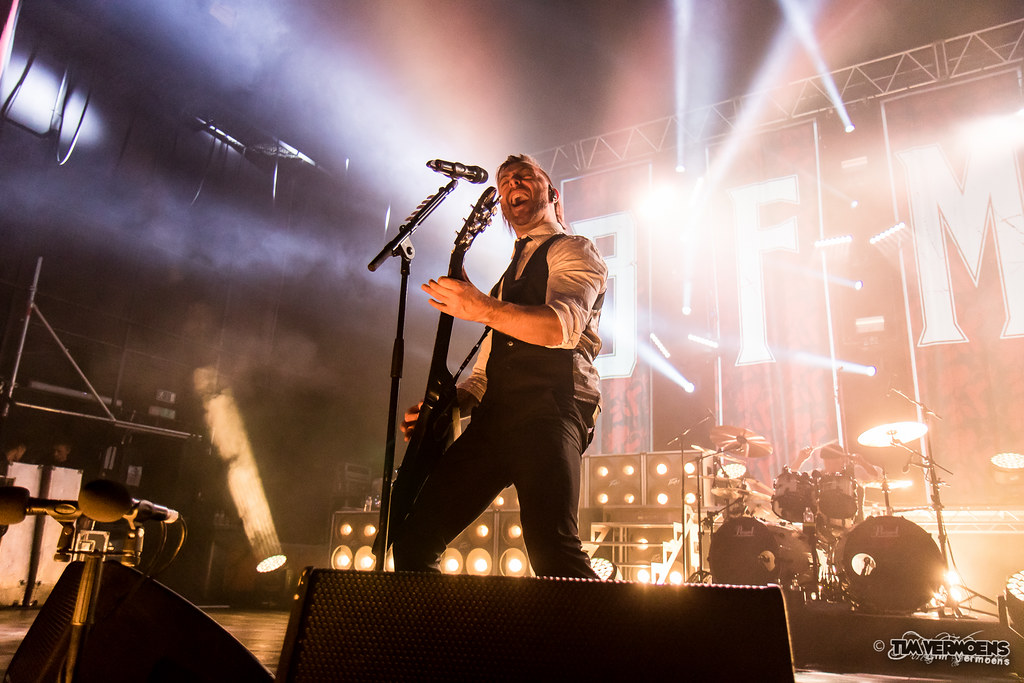 What is your favorite album?

Black Album, Metallica. That was the reason why we’re speaking today.

What's the first album you bought?

Black album, also. I bought two on the same day. Black Album and an album called… can’t remember the name of the album but the band is called Shokka Messiah. Don’t know if you ever heard of them? They are a Swedish glam rock band, I fucking love those guys. So I bought those two, they are the first two albums I bought myself.

Do you still buy physical albums, CD or LP?

Physical albums, no, not for a long time. I kind of moved on with the times as everyone else but forced into it mainly. But as a consumer it’s very easy and very cheap. I can get whatever I want right now.

Did you recently buy anything?

What did I recently buy… No, I haven’t bought anything for a while now. But last thing I bought was a single by a band called Bullet For My Valentine, it’s great.

Do you have a guilty pleasure?

I don’t know, not really. Being in a metal band, people aren’t expecting you to listen to pop music for example. But I love pop music, like Taylor Swift, I think it’s great music.