Interview Call It Off: Maurice, Lesley

Artiest: Call If Off

Hey guys, can you start by telling me what your role is in this band?

Maurice: Hi I am Maurice and I am the guitar player and the singer.

Lesley: I am Lesley and I am the bass player.

How did you guys end up playing for Call It Off?

Lesley: Two years ago I was a tour manager for another band. And I ended up talking with these guys and then I started playing in the band.

Maurice: I was a guitar player in another band but I knew Adrian for a long time. So we had an idea to play in a band together. Then we called some friends and we sat together and then we talked about what we could do for each other. We started writing some stuff and started playing together and we had a good feeling about it.

Why did you decide to play pop punk rock?

Maurice: Well we are just in love with this genre, we grew up with it. We thought why would we play something else than the genre we love.

So you brought out some music videos, and great songs, what is the future for this band?

Lesley: Well we are working on a new album. We think it will come out next year. We have been playing a lot of shows and now we wanted to focus on making a great record.

Will there be some guest artist on the album?

Lesley: No we chose not to have guest artists on the album and we aren’t really planning to do that in the future.

Maurice: Of course when a big artist wants to work together with us we will do that but it isn’t our intention to look for artists that want to be a guest artist for us.

Your latest album Lovers & Liars has been brought out in February, how did the fans and the local scene react to it?

Maurice: The album is actually a combination of the previous EPs. We added some bonus tracks on it of course. Our EPs were limited edition so fans that couldn’t get one were able to buy something with those songs on it.

Lesley: The fans knew the album for the biggest part so we knew how they would react, they liked it and we are happy they did. 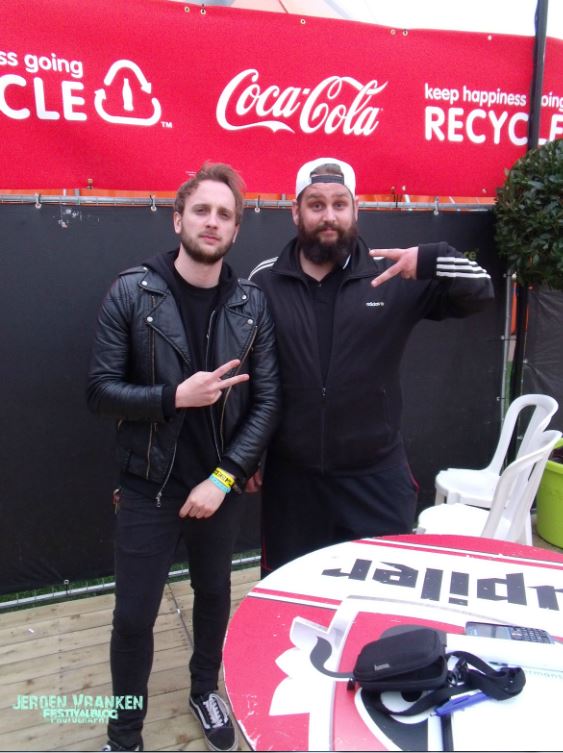 How do you think the fans will react on the album that you are working on?

What did you think of the show today?

Maurice: It was great, there were people from the Netherlands, Belgium, Sweden, Spain, France, Germany and other countries. We really liked playing here.

The crowd wasn’t that enthusiastic at the beginning but Adrian was able to change that.

Lesley: Yeah Adrian did a great job, at the beginning people weren’t moshing and weren’t singing that loud, it was as if they were asleep. Then Adrian jumped in to the crowd and then he made sure they had a good time. It is great to see that he could do all those things, he really knows how to handle the crowd.

What are some funny moments that you guys had with Call It Off?

Maurice: Well the funniest moment we had is the show in Poland.

Lesley: Yeah that is a great story we still laugh about it now.

Maurice: So we had to play a show there and after the show at night we decided to sleep in our bus. At the morning a military guy woke us up and he was screaming things we couldn’t understand and by military I mean a dude with a big ass gun and military clothes. So we didn’t know what to do at first. After some minutes we knew what the problem was, our bus stood in front of one of the biggest banks in Poland and behind us stood a truck that transports money from banks. So they thought we were boycotting that. The dude from the military became angrier with the minute and then we moved the bus. At the moment we didn’t know what to think, at first we thought there were problems because we were from the Netherlands but yeah at the moment it was really scary.

Maurice: Well here we go with another cliché but our fans are the best, they are so nice to us and we couldn’t be who we are without them.

Lesley: Yeah it is a cliché but the cliché has a truth, we can’t play shows and sell stuff if there is nobody to play a show to or nobody to sell our stuff to.

Do you have some pre show rituals?

Maurice: No not really, mostly we are laughing with Lesley because he is always really nervous.

Lesley: Yeah I am always really nervous, they say I don’t have to be but I will always be very nervous.

What do you think is important that people need to know about this band?

Lesley: I think it is important that people know we want to make fun with music. We really like making music and we want people to see that.

Are there places that you haven’t performed but that you want to?

Lesley: We just want to play shows, it doesn’t really matter where, we like Belgium and Germany but other places are just as fun.

Are you going to see other bands today?

Maurice: Yeah we saw some other bands today and we will be here to watch other bands.

Thank you for the interview, do you have anything left to say to your fans?

Maurice: Here we go with the cliché again, we want to thank the fans for everything, especially for today, we had a blast.

Lesley: Yes and keep supporting the local scene and just go to shows and have fun and thank you for the interview.