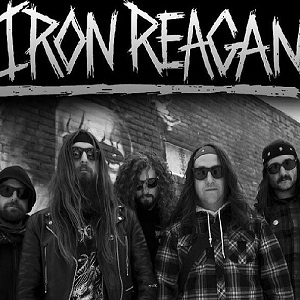 Hi! Welcome to the interview with Festivalblog.be.

Well, thank you for having me today.

No problem! Can you introduce Iron Reagan to the readers of Festivalblog?

Iron Reagan is a thrash metal band from Richmond, Virginia and we’ve been together for almost three years. We’ve done nothing then recording and touring since we started. We are just a couple of friends having some fun.

Well then, how did you made up the bandname Iron Reagan?

Tony [singer of Iron Reagan] is the mastermind behind that. He had it forever, but he never had a band to put it in.

And any other name didn't came up?

Well, actually we tried, but nothing was good enough, so we just stayed with Iron Reagan.

Can you tell me something about the music of Iron Reagan?

It’s like a bunch of crossover, punk, thrash; it’s a whole mix and mash about our backgrounds and where we are from. It’s a mixture of everything.

Okay, so are there any influences on your music?

Ah well, everything from At The Gates to whatever, some people in the band love the hardcore band Judge. Otherly it’s everywhere. Like one dude loves Cannibal Corpse and the other one loves something different.

You’ve all played or still playing in other bands. Why did you wanted to do a project like Iron Reagan?

What can you tell me about the lyrics of Iron Reagan?

I don’t know, sometimes we can make fun of everyday life and sometimes you have to point out the really weird stuff; the stuff that is difficult to talk about. But it’s better to say it through music and it’s not like in a preaching way or something like that.

How about the inspiration behind the single ‘Eyeball Gore’?

(laughs) Tony likes old horror movies and he knew a buddy that collects them. ‘Eyeball Gore’ just seemed like to makinng the gorest music video ever. It’s hard to look at. (laughs)

About the albums ‘The Tyranny Of Will’ and ‘Worse Than Dead’; are there any similarities or differences between them?

Well, ‘Worse Than Dead’ was very spontaneous. We just wrote it, recorded it and went for it. With ‘Worse Than Dead’ we got more creative with the guitars because we had more time. ‘The Tyranny Of Will’ is still heavy and blackened. I think they are different, but they have the same energy and both albums say the things that we are good at.

Okay. Whole different question. How do you like Belgium so far?

I love it here. The beer is very strong and I appreciate that. Even the Belgian beer in America doesn’t taste that good. We picked up the flavour how it supposed to have tasted. Yeah, it’s good beer, good people.

Well, what do you think about Groezrock then?

Well, I’ve been here a couple of times with Darkest Hour, but it has been great so far. The best part of this festival is the diversity, it’s amazing how all these people come together and have fun. I think America has to learn from that.

What do you expect from the show today?

I just want us to play well and I hope that people are going to have a good time. I am really going to have a great time (laughs). Yeah and it’s been our first time that we’ve played with Iron Reagan in Belgium. So this is it. We are really nervous!

Well, in three years of touring, you’ve played many shows. What was the best and worst show with Iron Reagan?

I would say every show is in some way good and bad. We have sometimes equipment that fails, that’s always kind of a bummer, but we just shake it off and we are doing the next show. Best show? Well, there have been a lot but I think that today also would be one of them. I have a feeling, that’s why I don’t wanna answer it yet (laughs).

You’ve made a splitalbum with Toxic Shock, which was great, by the way! But do you want to do another splitalbum? With which band would it be?

Of course. Iron Maiden, for sure. Iron Maiden and Iron Reagan, that would be the best album ever. That’s always one of the bands I’ve always admired. Million people will say that, but it’s the truth here (points at his heart).

What has been the craziest thing that ever happened to you on a tour or a show?

Craziest thing, well... (laughs) I don’t know, that’s actually a really good question, a lot of times I’m the guy that is falling a sleep. We just go very early to bed, like 9 o’clock. (thinking) Craziest story? I don’t know. It’s a good question. It’s wrecking my brain. We have been on a lot of touring, so it’s like our whole life is the craziest story. I just could tell you a 1000 stories, but one was bigger than the other, I don’t know.

I think the whole life of ours is a story. I will come back at this question later, hopefully in a interview with you. 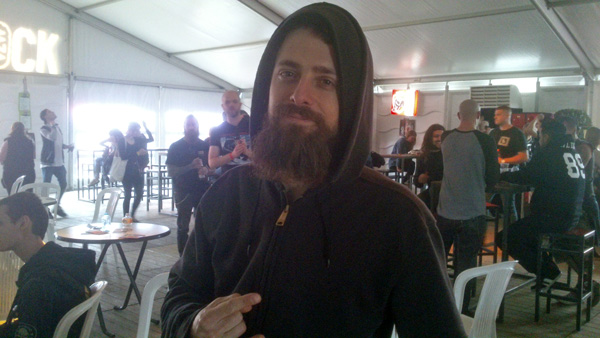 Can you describe Iron Reagan in 3 words?

It’s good, it’s good! What do you think your future will bring for you and the other members of Iron Reagan?

I don’t know. We just keep on going and doing as much and possible we can.

Thank you for this interview. The best of luck for the future.

Thank you so much!