Hi! How are you today, glad to play here at PPM Fest?

Yes, of course. We’re currently touring with Powerwolf and just came from Switzerland so we had a long travel, almost 800 kilometers to this festival.

Aren’t you tired after such a long ride?

A little bit, but we had a good driver and could sleep at night and we’re very happy to be here.

Are you looking forward to today’s performance? What do you expect?

How to say that, it’s quite a big venue. Everything could happen, maybe I’ll climb off the stage, who knows. But we’re really looking forward to play here with bands like Blind Guardian, quite cool.

The Power Prog & Metal Fest seems to be a perfect festival for you guys. How do you think about that?

Yes indeed, it fits perfect. Bands like Accept are playing here and we play power metal so yeah, it fits.

Any other Belgian festivals you’re attending this summer?

No, nothing confirmed but we’re going to plan it. Also Hof ter Lo, Antwerp would be nice. [Opmerking: Powerwolf is geconfirmeerd voor Graspop Metal Meeting 2012.]

When performing live, the stage is always very decorated. Also your outfits and your faces are remarkable. Where did this idea come from?

We represent something like a metal mass. It’s not only listening to music, it’s more than that, we want to transfer this atmosphere on stage. There is a lot of stuff with us on the tour, it’s like a big church.

It’s a bit weird to see you just like this, without the make-up and all the stage clothes.

(laughs) Yeah! It makes it easier when watching other bands so we don’t get recognized and can just watch it. If we wear it, people come to us and ask “can I have a picture?”. But yeah, it’s like a transformation. I’m wearing normal stuff and then I wear my stage clothes, like a masquerade.

What’s your vision against religion?

Powerwolf is a very spiritual band I think. It’s not especially religious stuff like Christianity, it’s different. It’s broader and we take that into our music which is heavy metal.

Religion, fantasy creatures and of course a wolf seems to be the line in your discography. How important is the wolf in Powerwolf and how did you come up with that?

The wolf stands for power and a strong enemy. By the way, on our first album ‘Return in Bloodred’, we were more influenced by Atilla’s roots from the Romanian saga and the wolf is his enemy, so that was the concept of the first album. After that we developed a bit more into religious stuff, but the wolf is for what it stands. I mean when you hear it, you must think: that must be heavy metal. By the way, there is a list with band names containing wolf and we exist since 2004. After that, many many more bands with the name wolf in it have been founded. It’s like a hype, haha.

We had religion, now a completely contrasting question: how much sex, drugs and rock’n roll does Powerwolf contain?

How to say that. When on tour, you always play the show but you also have parties after the show. It’s the best thing to do when you’re on the road, not only drinking, but hanging around with the guys and having some beers and such. Everyday another city, I love being on tour, better than writing songs.

Isn’t it sometimes tiring to be on tour so much?

At the first day, yes. But only at the first day, you arrive like at 10 o’ clock in the morning and you have so much time for your show at 10 o’ clock in the evening, but the time goes by quickly, we do a soundcheck and then whoop, the show is going on. You are like, in a certain mood after that. When you come back home, it’s quite difficult, haha.

What is your favorite metal album and did this have any impact on your musical career?

Piece of Mind, Iron Maiden! It had, when I listened to the album, Iron Maiden had for me a specific dark atmosphere, unique to heavy metal music. But for me personally my influences are also bands like Forbidden and Nevermore, more harder than other stuff but they have this certain dark atmosphere in the guitar line. But Iron Maiden is the biggest influence I must say. I also like bands like Moonspell, Behemoth. It’s a bit harder but they have some specific lines. When writing an album, you listen to some music and then you recognize, “oh this has some influence from this band”. But yeah, you’re not living in a room without any distraction, so it’s normal.

Which bands or band members do you look up to?

Steve Harris from Iron Maiden. I just recently watched the En Vivo dvd and the thing with this guy… He’s incredible. Yeah, I would like to meet Steve Harris.

Who would like to be a support for? That would be Iron Maiden I guess?

You also did the Power of Metal tour with Sabaton, how was that?

It was a really, really nice tour because I think we have similar fans with Sabaton. Each evening we had a great time, Sabaton and Powerwolf. Normally when you’re on the road with a headliner band and you’re supporting, you get some restrictions. But on this tour there weren’t any so we had really good parties back stage, really good parties on stage and in our home town many people were screaming “Powerwolf, Powerwolf!” in a Sabaton set. Normally you would say that’s not possible. I like this festival touring because everybody has a good time, also on stage, it’s not normal, haha.

What are the next plans? Already working on a new album, touring further after PPM Fest?

In Summer we’re playing some festivals in Germany and after that between May and September, we’ll write the new album in the studio until the end of the year, so much work to do. It will be released in Summer 2013 and after that touring again, the normal way. There’s no stopping, haha.

What’s the craziest thing that ever happened off stage?

When we played on a tour with Gamma Ray in Spain, Barcelona, our drummer has climbed up the Sagrada Familia while he had fear of high places. And he said I will do it and had a camera with him. He had so much fear and finally when he was on top of the building he noticed he didn’t have any batteries, haha.

To end this interview, can you describe Powerwolf in 3 words?

Thank you for the interview.

Thank you very much! 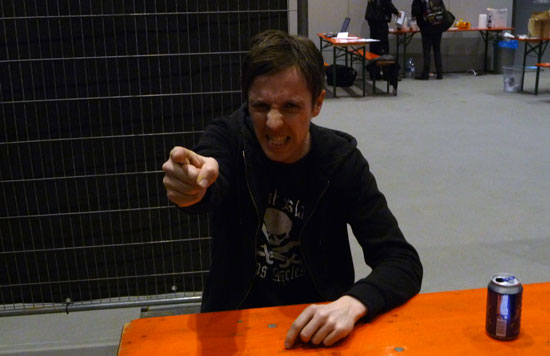