Hi! I'm from Festivalblog, it’s an honor to interview you.

How was the show today?

What did you in the time that you weren’t in Europe?

Well, the last time that we were in Europe was three years ago, I think. And we’ve just been writing, working and that stuff.

Did you work on the new LP 'We Never Sleep’?

Yeah, we did a couple of 7’’. And we’re working on a new album. We're going to record this album when we get back home. It’s going to be called ‘The God Rhythm’. The songs have been written and we really like it!

Can you tell us something about the history of Wisdom In Chains? How did the band started?

Ehm, it’s getting longer now (laughs). I’ll try to make it quick (laughs hard). The band was actually caught up by our friend Maarten from Holland. It was his idea. He came to us, but we had a few other bands in that time like Krutch, Mushmouth, Boxcutter and we did a lot of other projects. I played drums in the band Strength For A Reason. We had a lot of things going on, all at once. So Maarten had an idea for just a side-project. And we knew it wasn’t going to be like our permanent band, because we had all of these other projects. So, he came over to the United States and we’ve recorded an album that was released on a European label. We’ve pushed the other projects away, because the members moved away for whatever reason. We just stopped playing and we had the chance to either start a new band or to concentrate on a old project. So that’s how we did it! We chose Wisdom In Chains and we’ve got new members that are local to the places where we live. Yes, that’s how it went. 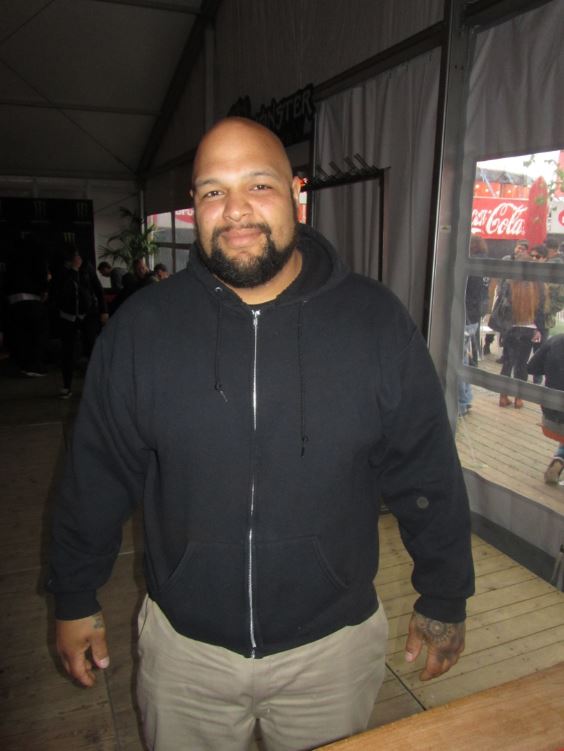 How did you came up with the bandname?

It’s a lyric from our ‘Killing Time’ song. Killing Time is one of my favorite bands when I got into hardcore. I only listened to New York Hardcore bands in the beginning, it was not on purpose. It just ended up that way. So I fell in love with Biohazard, Madball, Sick Of It All and that was my first show that I’ve ever saw. It changed my life forever. I shortly discovered bands after Killing Time that weren’t playing anymore.

Well, you’ve played on tour with Sick Of It All. How was it for you?

It was a dream come true! This is no exaggeration, my first show that I saw was Sick Of It All and my bassplayer from Wisdom In Chains weren’t in a band yet. We saw the show and we started the band like that night. We were like ‘OH MY GOD! I wanna do that. That’s what I wanna be.’ So my only goal in life since the beginning of playing hardcore music, was too play a show with Sick Of It All. Well, I’ve did 4 tours with Sick Of It All. We did so much of great things with them and we are friends now. That really blows my mind, because their music and lyrics mean so much too me. I will never forget that I’m that lucky to do what I do, you know. Because there are a lot of other bands that work a lot harder than we do and that are better then us, in my opinion, so I feel lucky to be with what I’m at. And I really feel like that Sick Of It All gaves us that signal and noticed us. I don’t know how we get picked out of the scene of hardcore bands; we got to be on tour with them and we didn’t know them personally. They were just kind enough to notice us and ask us to go on tour with them. We feel really lucky that they did that.

What are for you the differences and similarities between your hardcore and hardcore of other bands? Do you think that the scene of hardcore changed? How you feel about this?

It was good before I got into it. And then it got bad. And then it went good when I started to get into hardcore again and in the early 90’s. Then it was good again and it was bad all over the place. And now, it’s good again (laughs). It’s like a cycle. Hardcore is as good as the bands that play the music. So if there a lot of good bands, hardcore is doing great. Hardcore in my record collection went through a time period where every band was trying to sound like Hatebreed or Integrity. That’s okay in the beginning but then people stopped to experiment to be unique and different. But right now I think that hardcore is another high point, because there are many hardcore bands over there that sound so unique and don’t play like anybody else.

Can you say some bands that you think are very different from other hardcore bands?

Another question, what’s the craziest thing that you did on stage or backstage?

I would say a thing where I feel very bad about it: I punched a guy on stage during a show of Sick Of It All. I was singing guest vocals on a single of Sick Of It All and I punched a guy on the stage. I really felt bad about it. That’s about the craziest thing that I ever did. Our bassplayer once fell over a monitor, that was pretty fucked up. He fell on his back. I don’t know, we’re kind of a boring band (laughs). We don’t party or get crazy.

Well, the band blends a few different styles and always seems to keep things fresh and new with the sound. Is there any influence of hiphop/rap in your albums? Can we expect more of the same in the future?

Yeah, for sure. I love hiphop like since I was 3 years old. I think it’s like in the things of how I turn my lyrics. I try to use a little bit of hiphop into it and some motown music. I love the rhythm and that’s what you hear in our band too. So even outside of the beat that the drummer is playing, the singer has the responsibility to make words very catchy. So the best thing that I do is to give it a flaw. And I also try to add melodies that are memorable and stick in your head, you know what I mean?

Yes. It’s really memorable. Like the video that you’ve once made for ‘Ghost Of Buddy’. How did you came up with the idea to ask the fans for pictures from their dogs?

Well, do you know who’s idea that was? I think that was Freddie’s idea [Madball], because he did a lot with the last record. He was in the production and was really evolved with the record, also in the videos that we were doing after the album came out. I’m pretty sure it was his video! We made a lot of friends through the years and we’ve asked the fans to send some pictures of dogs and then we tried to get it in. We put our friends first but never gave up on the fans.

Well, a whole different question and maybe it’s too personal. But what tattoo on your body is related to the hardcore in Wisdom In Chains?

Ehm, I don’t have any specific tattoos that are related to my band, but the tattoos that are the best for me and people know me from, is my wife her name on the back of my ear, she's called Julia and I have my kid's names on my hand. So, the other tattoos don’t really matter to me, because that are my favourite tattoos. They mean more than anything for me. I have really some great tattoos, I do, but my life is for my wife and kids. That’s another reason why we haven’t been here in 3 years, because it’s really hard to be away from them. My son is like 8 years old right now and he’s at a stage where he really needs his ‘dada’, you know what I mean. So I really want to go back over there with them, because I really miss them. To me, the most that I got out of Wisdom In Chains is therapy, where we talk about painful subjects or things that frighten you. We may come to a realization of something, we’re gonna figure something out. The thing that I realized through all the years of Wisdom In Chains is that we are a family band. I sing about love and that’s the most important thing for me. That’s not what a normally hardcore band does, but that’s why we are different from the rest. Well, I’m gonna say, that’s my Wisdom In Chains tattoo.

That’s really the most perfect answer.

Can you describe Wisdom In Chains in 3 words?

No, you can not say Wisdom In Chains (laughs). Something different!

Oh my god. 3 words that describe Wisdom In Chains. (thinks)

Really the best answer so far on that question. Thank you and for your time! Good luck with Wisdom In Chains!